James Garbutt, Burnaby Realtor, has been ranked in the top 1% of Realtors since 2011. James was born and raised in the Buckingham Heights neighbourhood of Burnaby, between Deer Lake and Highgate, he loves the city, knows it well and has seen a lot of change in Burnaby since the early 1980s.

Denny Dumas, Burnaby Realtor, lives in the Brentwood Park area, and has been a top selling Realtor in Burnaby since 2014. Denny has sold a wide range of Burnaby real estate including; luxury homes in Government Road, pre-sale condos in Brentwood, condos, townhouses, duplexes, houses, old and new. Denny has the experience and local knowledge for buyers and sellers in the Burnaby area.

Burnaby is British Columbia’s third-largest city, renowned for its excellent system of parks and outstanding recreation and cultural facilities. It has a reputation for being one of the best run cities in Canada, and even the World. Burnaby is the suburb immediately east of Vancouver, it has highway access, 11 SkyTrain stations, and is arguably the most centrally located city, from a transportation perspective, in Greater Vancouver. Not only did the elevated train provide a direct, quick trip into Vancouver, it also sparked a boom of dense new residential and commercial development around each of the city’s SkyTrain stations that service three lines.

Burnaby is a good option for anyone looking for central location, with quick access to Downtown Vancouver, and nearly anywhere in Greater Vancouver. It is more expensive than other suburb cities to the East, however, it offers a wide range of property types at different ages and price points. If you can’t afford a new condo or townhouse there is often an older and more affordable one available near by. It has excellent transportation, parks and amenities, and with many public and private schooling options available, it is a great place to raise a family.

Burnaby’s detached housing market offers a wide range of styles, ages, sizes and price points. Burnaby isn’t known for one distinct style, rather neighbourhoods tend to have a history and style of their own. Many streets in Burnaby, are lined with smaller post war, mid-century homes. North Burnaby is known for more ‘Vancouver Special’ type houses in the Hastings area on the narrower 33′ lots, and luxury estates in the Government Road area. East Burnaby has more options of entry level homes at lower price points. South Burnaby has some of the most expensive homes, and arguably the most expensive land in the Deer Lake neighbourhood.

Burnaby offers a wide range of townhouses, new and old, in a wide range of prices all over the city. In Burnaby South, you’ll find many new developments, anywhere from Edmonds SkyTrain area all the way to Metrotown. You’ll find the best value, on a price per square foot basis, in Burnaby East and the foothills of Burnaby Mountain, in the Forrest Hills and Simon Fraser Hills neighbourhoods.

Burnaby has over 100 new residential buildings in planning to be in built in one of it’s four downtown centres; Metrotown, Edmonds/Highgate, Lougheed, and Brentwood. Metrotown is considered the true Downtown of Burnaby, but Brentwood due to it’s central location and highway access is more convenient for many. Lougheed and Edmonds are in early stages of future massive master planned communities, and in 20 years may be unrecognizable compared to what you see today.

In 2009, Burnaby was recognized by Maclean’s magazine as Canada’s best managed city. At least part of that may be due to its commitment to maintaining green space in its many, diverse parks. These include Deer Lake and Burnaby Lake parks, each surrounding ancient urban lakes that are home to wildlife like herons, eagles, turtles and even the occasional bobcat. Burnaby Mountain Conservation Area is one of the largest parks in Metro Vancouver, encompassing the region’s highest point with forested hiking and biking trails. Barnet Marine Park is quintessentially West Coast, with breathtaking views of ocean, mountains, sea and bird life, as well as passing freighters and tug boats from its sandy beach.

The city’s recreational and cultural facilities are second to none. Many of them are concentrated in the Central Valley area with quick and easy access to the Trans-Canada Highway. They include the Burnaby Lake Sports Complex that is comprised of artificial and natural grass pitches for soccer, rugby, football, field hockey, field lacrosse and even Aussie Rules Football. There’s also tennis courts, an archery range, rowing pavilion, an indoor pool, two municipal skating arenas and eight private ones.

The city’s cultural hub at Deer Lake Park includes galleries, studios, two theatres for live performances, an outdoor festival lawn for concerts and a museum that recreates life in the city as it might have been in the 1920s.

LOOKING FOR A BURNABY REALTOR? WE CAN HELP! 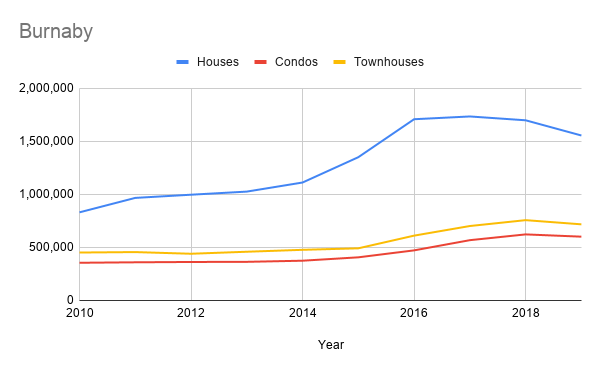