CLICK ON THIS INTERACTIVE MAP! It’s loaded with helpful information. Explore New Westminster’s neighbourhoods, see market statistics, search the MLS for all homes, condos and townhouses for sale in the city.

Garbutt + Dumas are top Realtors that know the Coquitlam real estate market. We offer Coquitlam homes for sale, townhouses for sale and condos for sale.  We know the best streets, the best parks, the best schools and daycare, the best places to get a cup of coffee after a morning run.  Coquitlam is a wonderful place to grow a family or retire in there are many amenities for both here.  Whether you are upsizing to a detached home or downsizing to a condo we are here to help.
Explore the city’s neighbourhoods by clicking on the links below, or use the interactive map.

Coquitlam is the sixth-largest city in British Columbia. It is located east of Vancouver, nestled between Burke Mountain and the Fraser River.
The city was first settled in the 1860s as a way-point between the province’s first capital in New Westminster and the year-round seaport in Port Moody. But in the early 1900s the community boomed as a lumber town when French-Canadian mill workers settled around a new state-of-the-art mill on the banks of the Fraser River. And while the mills are gone, that French-Canadian heritage lives on in the neighbourhood of Maillardville, with Francophone street names, schools and an annual festival of French-Canadian culture, Festival du Bois.
Today Coquitlam is a bustling residential suburb with a burgeoning urban area developing around the Town Centre shopping mall. Much of that growth is being driven by the arrival of the new Evergreen SkyTrain transit line that provides a rapid link to many of the 21 communities that comprise Metro Vancouver.

Located just 30 km east of Vancouver, Coquitlam is a vibrant, growing city for outdoor and urban enthusiasts alike. The city is more than 125 years old, and has a population near 140,000, making Coquitlam the largest city within the Tri-Cities of Port Moody, Port Coquitlam, and Coquitlam. With plenty of outdoor activities, a rich history, and a growing arts and culture district, there’s a lot to love about living in Coquitlam.

The city is known for its deep connection to French-Canadian heritage, as Coquitlam is home to one of the earliest French-Canadian settlements in western Canada. European settlers called Coquitlman home in the late 1800s, creating a bustling centre for logging and farming. That heritage rings true today, as Coquitlam is home to the largest community of francophone and French Canadians in all of British Columbia. North American tribes have also played a large role in the city’s history: the land on which Coquitlam sits has been inhabited by the Coast Salish for thousands of years, and the kʷikʷəƛ̓əm still exist in the local community today.

There’s more to Coquitlam’s history than meets the eye: the Coquitlam River was once a favorite fishing spot for John Wayne and Clark Gable, while the Minnekhada Lodge was built in 1934 as an expansive, nature-focused retreat for the wealthy. And the Westwood Racing Circuit has its own claim to Canadian fame by being the very first of its kind in Canada: a purpose-built road racing track. The Sports Car Club of British Columbia (SCCBC) financed the track’s construction and held the record for longest race in Canada in 1968.

Outdoor adventure is at your fingertips in Coquitlam. The city is incredibly bike-friendly, and boasts more than 60 km of pathways and biking trails. Take a leisurely cruise through the city to see the sights, or get an afternoon workout on a mountain biking trail. You’ll find designated bike lanes on main thoroughfares such as United Blvd., Mariner Way, David Ave, and more.

If city cycling isn’t quite your style, get your adrenaline fix on one of Coquitlam’s bike skills circuits. Mundy Park has beginner and intermediate-level circuits – complete with obstacles, log stacks, bridges, and even a timber teeter-totter. Kids and beginners will love the Leigh Park circuit, followed by a leisurely ride down the Riverview Forest Flow Trail.

Coquitlam’s love of the outdoors certainly doesn’t stop at biking. From dog parks and off-leash walking trails to expansive floral gardens, to award-winning parks and playgrounds, there’s an outdoor adventure for every member of the family. The Centennial Rose Garden and Canadian Heritage Rose Garden share 900-plus roses, making Coquitlam the perfect location for the Annual Rose Show. Take a stroll through the Riverview Arboretum to see more than 1,800 trees from around the world, and unwind amidst floral displays at Inspiration Garden.

Theatre and live music buffs will find their own inspiration within Coquitlam’s growing arts and entertainment community. The Evergreen Cultural Centre hosts a wide variety of shows and events throughout the year, from concerts to comedy shows to community theatre. Spend the evening immersed in music with the Cultural Centre’s Music on the Grill series, featuring dinner on a lakeside patio accompanied by live performances.

Above Ranch Park lies North Coquitlam, a bustling city centre that lies in the heart of urban Coquitlam. With plenty of commercial buildings and expansive offices, North Coquitlam is the perfect place for young homeowners or business professionals. Tons of up-and-coming restaurants, bars, shops, and three SkyTrain stops make North Coquitlam a vibrant (and very walkable) place to buy a townhome or a condo.

Maillairdville is one of Coquitlam’s oldest neighborhoods. This distinctive French-Canadian residential area was developed in the early 1900s around a local lumber mill. Macon Park features a skateboard bowl, spray park, and tennis courts. In the spring, Maillairdville is home to the Festival du Bois, a celebration of francophone heritage, including French-Canadian delicacies, music, and dance. Homes in Maillardville are diverse, ranging from 20th century historical homes to newly built detached homes and condos.

Ready to learn more about Coquitlam and what each area has to offer? Use the interactive map to explore each neighborhood further and find the perfect location for your new home!

Why Live in Coquitlam?

Coquitlam is unique in that it has both a laid-back feel and a contemporary vibe, bringing the best of a community-based atmosphere with the best of urban living. The city effortlessly combines live music, theatre, art galleries, and shopping centres with wide open spaces, parks, and hiking trails. There are a lot of reasons to buy a home in Coquitlam, but here are some of our favorites:

Whether you are looking to build a family or settle down in your golden years, Coquitlam is a wonderful place to call home. Although the commute to Vancouver may be a little longer than other areas of Greater Vancouver, the ability to easily travel from a suburban community to a bustling metropolis makes Coquitlam an increasingly desirable city to live in.

The Coquitlam real estate market is filled with homes, townhouses, and condos for sale across each neighborhood. Because of its close proximity and easy commute to Vancouver, its expansive outdoor recreation, and down-to-earth community atmosphere, real estate throughout Coquitlam is consistently in high demand.

As a result, many real estate prices in the area tend to be on the higher end, along with the average cost of living. Within Greater Vancouver, Coquitlam ranks as the 12th expensive city, making it a relatively affordable city when compared to neighboring markets.

Of course, each and every neighborhood has its own average cost, amenities, and community atmosphere that will influence the cost of realty in Coquitlam. The best way to find the right home for you – whether you want a detached home, a condo, or a townhome – is to talk with your real estate agent. Together, we’ll help you find the perfect Coquitlam home for your lifestyle, your needs, and your budget. 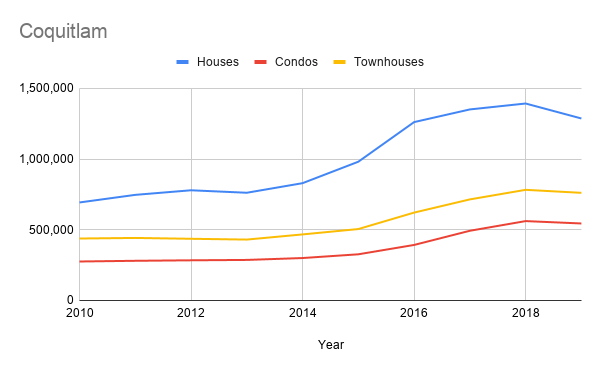