Maillardville is one of Coquitlam’s oldest neighbourhoods. It grew up around a lumber mill that was built along the Fraser River in the early 1900s and attracted workers from Quebec. Some of its principals are commemorated by street names in the neighbourhood.
Maillardville straddles the Lougheed Highway along the southern edge of Coquitlam where it meets New Westminster.

Maillardville’s historic roots make it a very walkable and family-friendly neighbourhood. While the lumber mill is long gone, the community’s focal point is now Mackin Park and Place des Arts, just across the street.
Macon Park is the home field for Coquitlam Little League baseball, a sport that has been played there since the 1920s, when a team comprised of mill workers challenged teams from as far away as Seattle on Sunday afternoons.
The park also features sports fields for soccer and minor football, as well as a playground, skateboard bowl, spray park, tennis courts and walking trails.
In March, the park comes alive with Francophone music and dance, the smells of maple syrup and poutine at the Festival du Bois, a celebration of the neighbourhood’s heritage.
Place des Arts offers programs in visual and performing arts for all ages, as well as studios and galleries
Independent shops and services can be found in a small commercial centre on Brunette Avenue. Large retailers including Canadian Tire, grocery stores and a 20-screen movie theatre complex are located along the Lougheed Highway.

Maillardville is well-served by buses that connect to the Lougheed and Braid SkyTrain stations.
The neighbourhood’s main thoroughfare, Brunette Avenue, connects to the Lougheed Highway and Highway 1.

Maillardville offers a diverse mix of residential properties. Some of the older detached homes date to the neighbourhood’s days as a mill town. Newer homes and townhouses are also available. 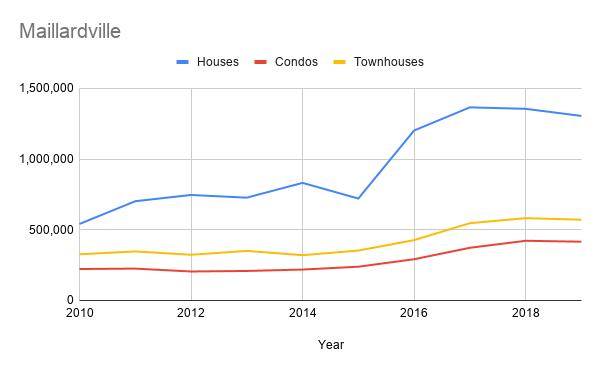