North Coquitlam is a dense, walkable urban neighbourhood with amenities like transit, schools, shopping, recreation and culture close by. It is bordered by Johnson Street, Guildford Way, Pipeline Road and Lougheed Highway.

North Coquitlam is at the heart of the city’s busy Town Centre area.

Next to the lake, the Evergreen Cultural Centre features a 257-seat theatre for live performances, a rehearsal hall, art studios and an art gallery.
Across Pinetree Way, the City Centre Aquatic Complex hosts activities for the whole family, from a wave pool, to competitive swimming and synchronized swimming to fitness programs for all ages.

Next to it, the Coquitlam campus of Douglas College helps serve more than 14,000 credit students and 9,000 continuing education students in programs that range from Criminology to Sport Science.

North Coquitlam has developed into a dense urban hub in anticipation of the arrival of then new Evergreen extension to SkyTrain. The commuter rail system links much of Metro Vancouver along 79 kms of elevated and underground track.  Three stations, Lafarge Lake-Douglas, Lincoln and Coquitlam Central, are all within walking distance or a quick bus connection.

The neighbourhood is also located at the intersection of the Lougheed and Barnet highways.

Most of the housing in North Coquitlam is comprised of condos and townhouses, much of it constructed in the past 10 years. 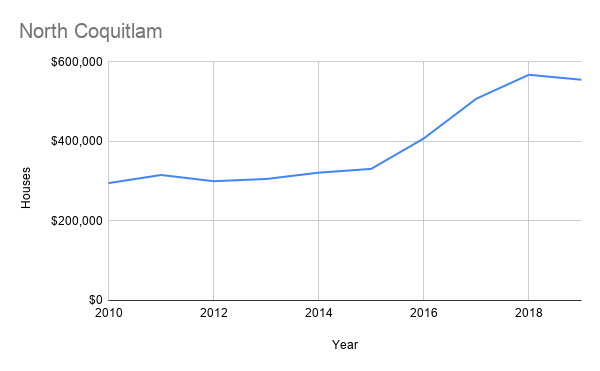