River Springs is a small neighbourhood on the east side of the Coquitlam River, just south of Park Ridge Estates. It is bordered by Oxford Street, David Avenue and Lincoln Avenue.

River Springs is close to the network of hiking trails on Burke Mountain that extend all the way to Pitt Lake. The neighbourhood has its own community centre and it’s not far from the shopping, transit, cultural and  recreational amenities of Coquitlam’s Town Centre area, or Downtown Port Coquitlam.
Coquitlam Centre is one of British Columbia’s largest regional shopping malls.
Town Centre Park is Coquitlam’s showcase outdoor sport and recreation facility with numerous artificial and natural turf pitches for soccer, field hockey, field lacrosse, baseball, softball and football, as well as a track and field facilities at Percy Perry Stadium. For less rigorous recreation, the park also features walking trails that wind around Lafarge Lake, a five-hectare man-made lake that was originally a quarry.
Next to the lake, the Evergreen Cultural Centre features a 257-seat theatre for live performances, a rehearsal hall, art studios and an art gallery.
Across Pinetree Way, the City Centre Aquatic Complex hosts activities for the whole family, from a wave pool, to competitive swimming and synchronized swimming to fitness programs for all ages.
Next to it, the Coquitlam campus of Douglas College helps serve more than 14,000 credit students  and 9,000 continuing education students in programs that range from Criminology to Sport Science.
Downtown Port Coquitlam retains much of its historical charm as a terminus for the Canadian Pacific Railway that moved its freight operations to the city in 1911. That heritage is captured in murals painted on the sides of some commercial buildings that house a variety of independent shops, cafés and services. In July, the area comes alive with the new PoCo Grand Prix criterium bike race and festival, that is part of the BC Superweek competition for professional cyclists.

Shuttle buses run into the neighbourhood from Shaughnessy St that transport residents to and from Port Coquitlam. The new Evergreen extension to SkyTrain is also nearby to transport commuters to much of Metro Vancouver along its 79 kilometres of elevated and underground rail.

River Springs is one of Coquitlam’s more affordable neighbourhoods of detached homes. 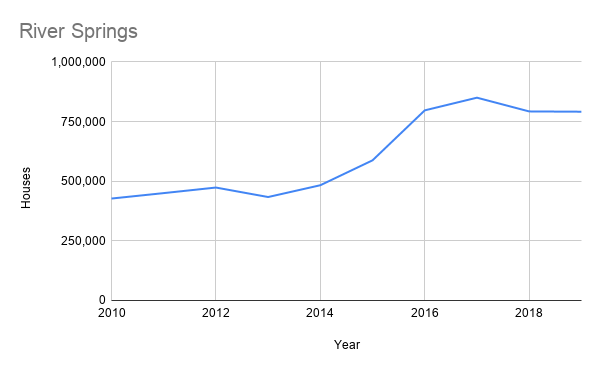