CLICK ON THIS INTERACTIVE MAP! It’s loaded with helpful information. Explore Port Coquitlam’s neighbourhoods, see market statistics, search the MLS for all homes, condos and townhouses for sale in the city.

Port Coquitlam is a residential city at the junction of the Fraser and Pitt Rivers.  When Port Coquitlam was first incorporated in 1913, it was mostly rural farmland. But as Metro Vancouver has grown those farms have been developed into tracts of suburban housing. In 2011, more than 56,000 people called it home.

Port Coquitlam’s biggest claim to fame is the childhood home of Canadian hero Terry Fox. He was a young athlete who bravely set off in 1980 to run across Canada to raise money for cancer research after he lost a leg to the disease. His quest was cut short months later after 5,373 kilometres when the disease reappeared in his lungs. He passed away in June 1981. His effort lives on, though, at an annual run that is held world wide every September and has raised more than $650 million. Fox’ heroism is commemorated by a statue in front of the Port Coquitlam Library. It is one of hundreds memorials in his name across Canada, from schools to a mountain in the Canadian Rockies.

Port Coquitlam is well-connected to the rest of Metro Vancouver by the Lougheed Highway, that also heads east into the Fraser Valley. 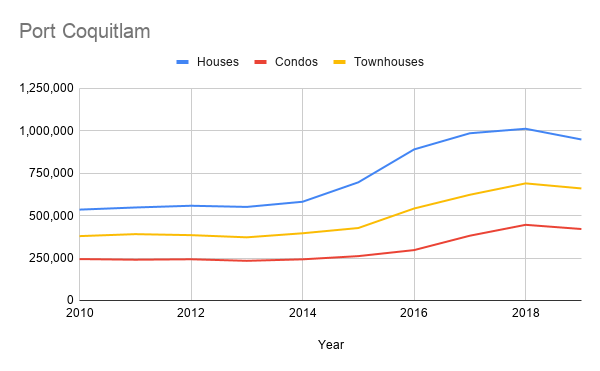