Glenwood is an established family-oriented neighbourhood on the north side of the Lougheed Highway, between Shaughnessy Street and Coast Meridian Road.

Glenwood’s abundance of parks and schools, and its proximity to recreational and commercial amenities make it a desirable neighbourhood for families. McLean and Blakeburn parks offer sports fields, ball diamonds and playground.

The nearby Hyde Creek Recreation Centre is the hub for leisure activity for residents of Glenwood. The 55,000 square foot complex has a lap pool, leisure pool, water slide, sauna, climbing wall, gymnasium, racquetball and squash courts as well as a weight and fitness room. The centre is surrounded by a nature reserve laced with walking and biking trails. Every September it is also the starting point for the Terry Fox Hometown Run that celebrates the short life and considerable legacy of Port Coquitlam’s hero, Terry Fox, who embarked upon a run across Canada after he lost a leg to cancer. Fox never completed his run as the cancer reappeared and ultimately took his life. But his run has spread around the world and raised tens of millions of dollars for cancer research.

Small retailers, cafés, restaurants and major grocery stores can be found at a commercial area at Prairie and Coast Meridian, as well as along the Lougheed Highway. Or just scoot across the Lougheed into historic downtown Port Coquitlam with its small-town ambiance. The historic downtown core has been given new life with the arrival of modern retailers like Donald’s Market as well as a number of independent shops, cafés, bakeries and even a dinner theatre. The plaza in front of Port Coquitlam’s city hall is a lively community gathering place for events and outdoor concerts. The area has also been enlivened by the annual PoCo Grand Prix, a professional bike race and festival that is part of the BC Super Week of races that attracts top cyclists from around the world every July.

A short drive west along the Lougheed will bring you to the major commercial area of neighbouring Coquitlam, anchored by the Coquitlam Centre, one of the largest malls in the province.

With major arterial routes along all of its borders, Glenwood is well-served by transit and offers quick access to commuter routes for motorists.

Bus service connects to the West Coat Express and to the new Evergreen extension of SkyTrain, for convenient, hassle-free transportation into Vancouver or elsewhere in Metro Vancouver.

Glenwood offers a variety of real estate options to meet every need and budget. Older homes are mixed with new. There’s also townhouses and condo developments that may be more attractive to first-time buyers. 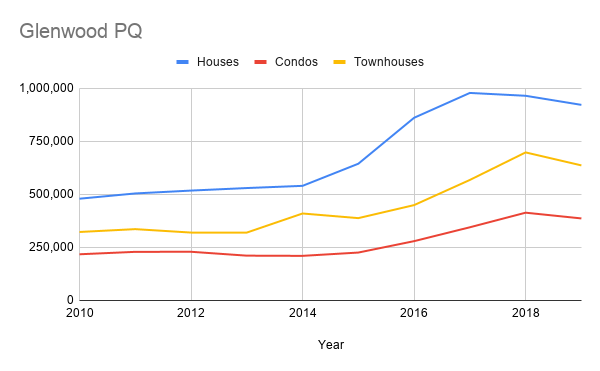