Lower Mary Hill is a growing neighbourhood that offers a mix of older and newer homes, as well as townhouses and condos. The neighbourhood’s proximity to parks, schools and the amenities of historic downtown Port Coquitlam make it an excellent choice for families and first-time homebuyers.

Lower Mary Hill has boomed in recent years as home buyers become aware of its small-town ambiance and easy access to big-city amenities.

The neighbourhood’s many parks give families the opportunity to enjoy the outdoors together. Kilmer Park is a forested park at the edge of Lower Mary Hill that features a playground and trails that connect it to nearby Thompson Park with its soccer pitch, baseball and softball diamonds.

Right next to Thompson Park, Cameron Park is a quaint neighbourhood park with a playground and a small softball diamond.

Historic downtown Port Coquitlam is just a short distance away. The historic downtown core has been given new life with the arrival of modern retailers like Donald’s Market as well as a number of independent shops, cafés, bakeries and even a dinner theatre. The plaza in front of Port Coquitlam’s city hall is a lively community gathering place for events and outdoor concerts. The area has also been enlivened by the annual PoCo Grand Prix, a professional bike race and festival that is part of the BC Super Week of races that attracts top cyclists from around the world every July.

At the edge of downtown, the Port Coquitlam Recreation Centre has two ice rinks that offer a variety of programs from learn-to-skate to Junior B hockey.

Next to it is the Terry Fox Library, named after Port Coquitlam’s hero, Terry Fox, who embarked upon a run across Canada after he lost a leg to cancer. Fox never completed his run as the cancer reappeared and ultimately took his life. But his run has spread around the world and raised tens of millions of dollars for cancer research.

Lower Mary Hill is close to the Port Coquitlam train station which is serviced 10 times daily by the West Coast Express commuter rail service to and from Vancouver’s downtown.

Bus service also connects the neighbourhood to Coquitlam Central station for connections to the many parts of Metro Vancouver via the Evergreen extension of SkyTrain.

The Mary Hill Bypass is a major arterial route that offers a quick link to Highway 1.

Lower Mary Hill features a mix of older and newer homes as well as new condos and townhouses that might appeal to first-time homebuyers, young families or empty nesters looking to downsize. 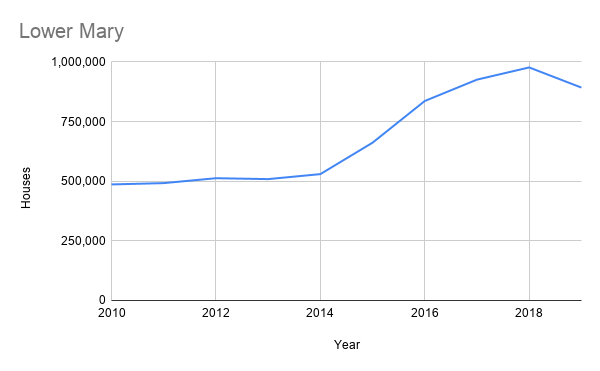