Lincoln Park is an evolving neighbourhood that has seen a lot of new development in recent years after it was first developed in the 1950’s. That makes for a dynamic mix of established smaller homes and more contemporary larger homes, duplexes and townhouses.

Lincoln Park is a perfect family neighbourhood because of its abundance of schools, and proximity to parks and recreational facilities.

The Hyde Creek Recreation Centre is the hub for leisure activity for residents of Lincoln Park. The 55,000 square foot complex has a lap pool, leisure pool, water slide, sauna, climbing wall, gymnasium, racquetball and squash courts as well as a weight and fitness room. The centre is surrounded by a nature reserve laced with walking and biking trails. Every September it is also the starting point for the Terry Fox Hometown Run that celebrates the short life and considerable legacy of Port Coquitlam’s hero, Terry Fox, who embarked upon a run across Canada after he lost a leg to cancer. Fox never completed his run as the cancer reappeared and ultimately took his life. But his run has spread around the world and raised tens of millions of dollars for cancer research.

Lincoln Park is also close to Minnekhada Regional Park, a sprawling reserve of forests, marshland and stunning vistas across the Pitt River to the Golden Ears Mountains. The park’s focal point is historic Minnekhada Lodge, built in the 1934 as a hunting retreat for Lieutenant Governor Eric Hamber and now used for conferences, weddings and banquets.
At the edge of the Lincoln Park neighbourhood, the Carnoustie Golf Club is a mature course with firm greens, lush fairways and outstanding views of the nearby mountains.
Shopping, restaurants and services can be found at the Dominion Triangle, a 270-acre mixed-use development that includes big box retailers like Costco and Home Depot as well as grocery stores and smaller specialized retailers.
Historic downtown Port Coquitlam, with its small-town ambiance, is just a short drive away across the Coast Meridian Bridge. The historic downtown core has been given new life with the arrival of modern retailers like Donald’s Market as well as a number of independent shops, cafés, bakeries and even a dinner theatre. The plaza in front of Port Coquitlam’s city hall is a lively community gathering place for events and outdoor concerts. The area has also been enlivened by the annual PoCo Grand Prix, a professional bike race and festival that is part of the BC Super Week of races that attracts top cyclists from around the world every July.
Schools

Lincoln Park is well-served by buses that connect to downtown Port Coquitlam and the West Coast Express commuter train service into Vancouver.
The Lougheed and Barnet highways are also nearby, as well as the Mary Hill Bypass for a quick connection to Highway 1.

Lincoln Park offers a mix of older bungalows, many of them built in the 1950’s, to new developments of townhouses and duplexes. 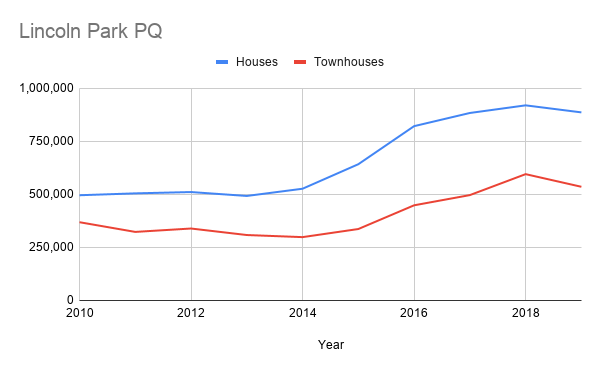