Birchland Manor is an established family-friendly neighbourhood of detached homes and townhouses that straddles Prairie Avenue, east of Coast Meridian Road and near the Carnoustie Golf Club.

Birchland Manor is close to shopping, services, schools and recreational facilities. But nature is never far away.
Small retailers, cafés, restaurants and major grocery stores can be found at a commercial area at Prairie and Coast Meridian, as well as along the nearby Lougheed Highway. A short drive west will bring you to the major commercial area of neighbouring Coquitlam, anchored by the Coquitlam Centre, one of the largest malls in the province.
The Hyde Creek Recreation Centre is the hub for leisure activity for residents of Birchland Manor. The 55,000 square foot complex has a lap pool, leisure pool, water slide, sauna, climbing wall, gymnasium, racquetball and squash courts as well as a weight and fitness room. The centre is surrounded by a nature reserve laced with walking and biking trails. Every September it is also the starting point for the Terry Fox Hometown Run that celebrates the short life and considerable legacy of Port Coquitlam’s hero, Terry Fox, who embarked upon a run across Canada after he lost a leg to cancer. Fox never completed his run as the cancer reappeared and ultimately took his life. But his run has spread around the world and raised tens of millions of dollars for cancer research.
Birchland Manor is also close to Minnekhada Regional Park, a sprawling reserve of forests, marshland and stunning vistas across the Pitt River to the Golden Ears Mountains. The park’s focal point is historic Minnekhada Lodge, built in the 1934 as a hunting retreat for Lieutenant Governor Eric Hamber and now used for conferences, weddings and banquets.
At the edge of the Birchland Manor neighbourhood, the Carnoustie Golf Club is a mature course with firm greens, lush fairways and outstanding views of the nearby mountains.

Buses run along Prairie Avenue and Coast Meridian Road that connect into downtown Port Coquitlam as well as west to the Coquitlam Town Centre area where it’s possible to transfer onto the Evergreen extension of SkyTrain to much of Metro Vancouver.
Motorists can use the Lougheed Highway to get to the Mary Hill Bypass that connects to Highway 1, or head west to connect to the Barnet Highway into Burnaby and Vancouver.

Birchland Manor is comprised mostly of established single-family homes that were built in the 1970s and 1980s, as well as newer homes and townhouses. 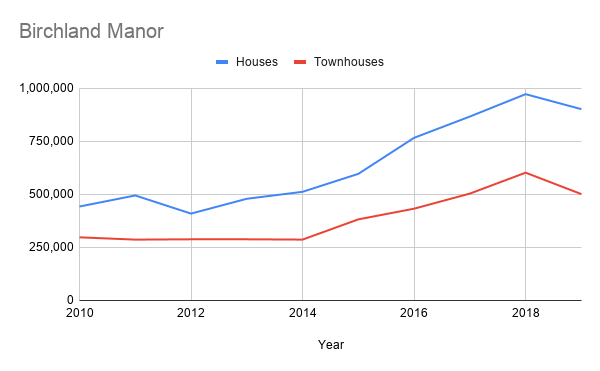