Citadel is a residential neighbourhood in the southern part of Port Coquitlam that rises up from the banks of the Fraser River and overlooks the nature preserve at Colony Farm Regional Park.

Citadel is family friendly. The neighbourhood’s three major parks, Citadel Heights, Castle and Kroeker are an allure with their open spaces, dynamic playgrounds and views up and down the Fraser River. There’s also two elementary schools and one middle school within walking distance of most homes. Riverside Secondary is just at the northern edge of the neighbourhood.
Port Coquitlam’s historic and quaint downtown core is only a short distance away. The commercial centre of the community has been given new life with the arrival of dynamic retailers like Donald’s Market, as well as a number of independent boutiques, cafés, bakeries and even a lively dinner theatre. The plaza in front of City Hall is a popular community gathering place for events and outdoor concerts. The area has also been enlivened by the annual PoCo Grand Prix, a professional bike race and festival that is part of the BC Super Week of races that attract top cyclists from around the world every July.
Colony Farm Regional Park, along the western edge of Citadel, is a 260 hectare park that straddles the Coquitlam River. The park was once the most modern and productive working farm in Canada. Its wide open spaces and wetland areas make it a popular home and way station for more than 200 species of migratory and resident birds. The park is laced with more than 15 kilometres of hiking and biking trails as well as picnic areas, footbridges and lookouts.
The Traboulay Poco Trail runs along the Fraser River and encircles the city. The 25.3 km flat, multi-use trail is named after a popular former mayor of the community, Len Traboulay.

Citadel is well-served by a shuttle bus that connects to downtown Port Coquitlam, the city’s West Coast Express station as well as into Coquitlam for connections with the Evergreen extension of SkyTrain.
The Mary Hill Bypass, that skirts the southern edge of the neighbourhood, is a major arterial route that provides a direct connection to Highway 1 and the Lougheed Highway.

Citadel has a wide variety of housing, from large custom homes to townhouses and condo apartments in a broad range of prices. The neighbourhood’s proximity to amenities and transportation makes it one of the more desirable areas in Metro Vancouver. 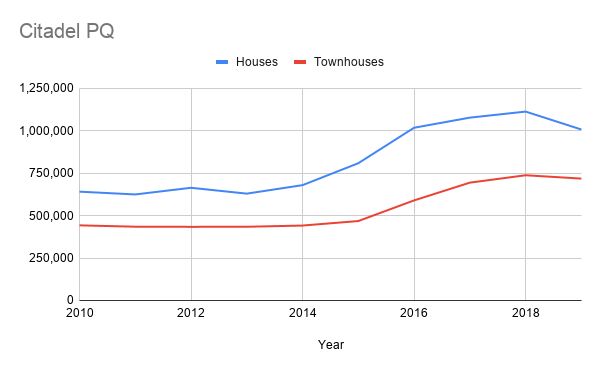