CLICK ON THIS MAP.  It’s interactive and loaded with helpful information.   Explore New Westminster’s neighbourhoods, see market statistics, search the MLS for all homes, condos and townhouses for sale in the city.

If you’re looking for Port Moody real estate, Garbutt + Dumas are local Realtors that know the city. We offer Port Moody homes for sale, townhouses for sale and condos for sale. We know the best streets, the best parks, schools and daycare, the best way to get to Brewer’s Row.

Port Moody is an historic city that wraps around the east end of the Burrard Inlet.
It was founded in 1859 by Colonel Richard Moody of the Royal Engineers, the same military troop that settled New Westminster. The city served as a year-round port for British Columbia’s first capital but it boomed in 1881 when it became the western terminus for the Canadian Pacific Railway. The boom didn’t last long though as the city’s growth stalled when the rail line was extended into Vancouver in 1887.

But it’s regained new life with the completion of the Evergreen SkyTrain extension that transports commuters into Vancouver and elsewhere in the Metro area in about 40 minutes. The transit line has fuelled massive new development projects of condos and townhomes near its stations at Moody Centre and Inlet Centre.
Some of Port Moody’s railway heritage is preserved in its small, historic downtown and at the Port Moody Station Museum, near Rocky Point Park. 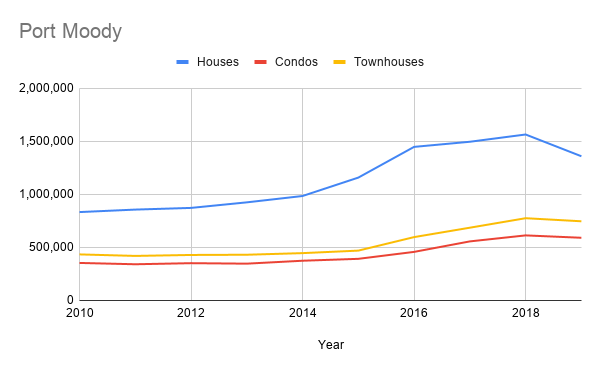