Port Moody Centre is considered the city’s “downtown.” The neighbourhood is a mixture of residential and commercial development that flanks St. Johns Street, from Barnet Highway at its west end to Ioco Road at the eastern end. The arrival of the Evergreen extension of SkyTrain, with stops at Moody Centre and Inlet Centre will further influence the evolution of the neighbourhood with the construction of higher density condo and townhouse developments.

St. Johns Street is a busy commercial strip of shops, services, restaurants and cafés. One block north of that, Clarke Street offers a more relaxed pace of shops, galleries and bistros in Port Moody’s historical core.
And one block north of that, on Murray Street, a new vibe for the city is being created along Brewer’s Row where four renowned craft breweries offer an eclectic variety of artisanal beers all within walking distance of each other.
Most of Port Moody Centre is within an easy walk of the city’s natural waterfront that offers a variety of activities, from outdoor music concerts to paddling to swimming in an outdoor pool at Rocky Point Park. A series of trails and boardwalks extend along the south shore of Moody Inlet, through a protected marshland, to connect to a multi-use path at the Port Moody Recreation Centre.
The recreation centre includes an ice rink, soccer pitch, tennis courts, fitness centre, library as well as Port Moody City Hall.

Port Moody is well-served by public transit, including express bus service along St. Johns Street that runs into Vancouver, two stations for the new Evergreen extension of SkyTrain and the West Coast Express commuter rail service. 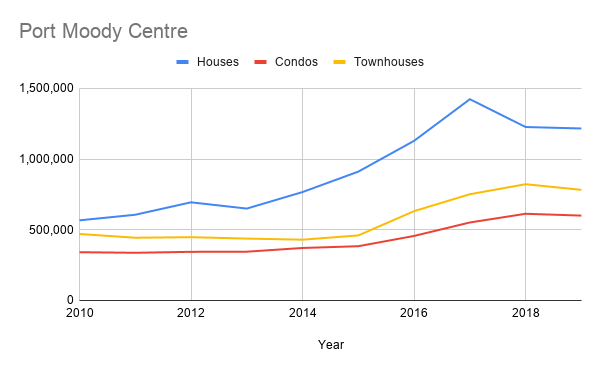