Mountain Meadows is a small family-oriented residential neighbourhood sandwiched between Heritage Mountain and Summit View. It is centrally-located to shopping and services in both Coquitlam and Port Moody.

Mountain Meadows is close to parks, schools and shopping.
Buntzen Lake and Belcarra are two regional parks that capture much of the Pacific Northwest’s diverse beauty. Buntzen Lake’s numerous hiking trails are a gateway into the surrounding mountains. The lake itself is a cooling oasis on hot summer days and a constant lure for fishers and canoeists. A little further west, Belcarra Regional Park features picnic areas, a pier, canoe and kayak rentals as well as a network of easier trails that provide spectacular viewpoints across the Burrard Inlet and up Indian Arm.
Just to the east of Mountain Meadows, the Westwood Plateau Golf and Country Club is considered one of the top 100 golf courses in Canada. Many of its 18 holes offer spectacular views of the Fraser Valley to the east and of the surrounding mountains to the north and west. The club also features an executive 12-hole course, a driving range, golf academy as well as a clubhouse and restaurant.
Shopping and services can be found just at the foot of Heritage Mountain Boulevard at Newport Village and Suter Brook Village. They’re each a mix new condos, townhouses and even office space around a lively central square of commercial shops, cafés and restaurants; it’s like being in Whistler but without the clomping of ski boots.
A little further east, Coquitlam’s bustling Town Centre area offers a broad range of shopping, dining and entertainment options, including one of the province’s largest shopping malls, Coquitlam Centre.
Nearby, Town Centre Park is the showcase outdoor sport and recreation facility in the Coquitlam and Port Moody area with numerous artificial and natural turf pitches for soccer, field hockey, field lacrosse, baseball, softball and football, as well as a track and field facilities at Percy Perry Stadium. For less rigorous recreation, the park also features walking trails that wind around Lafarge Lake, a five-hectare man-made lake that was originally a quarry.

Mountain Meadows is serviced by a shuttle bus that transfers commuters to Coquitlam or Port Moody Station for connections to the new Evergreen extension of SkyTrain, or the West Coast Express train service into Vancouver. The Lougheed and Barnet highways are the major commuter routes for motorists.

The neighbourhood only offers detached homes for sale but at a lower average price than its surrounding areas. That makes it one of the more affordable neighbourhoods in Greater Vancouver. 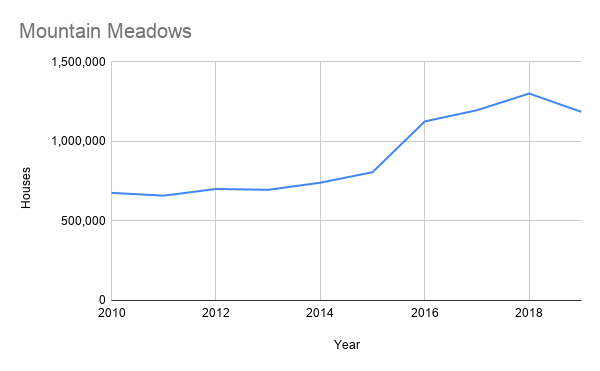