Heritage Mountain is a residential neighbourhood that crawls up from the eastern tip of Burrard Inlet along Heritage Mountain Boulevard. Many of the homes enjoy spectacular views across the inlet to downtown Port Moody and Burnaby Mountain

Heritage Mountain is just up the hill from two master-planned urban neighbourhoods that bring big-city amenities in a village package. Newport Village and Suter Brook each mix new condos, townhouses and even office space around a lively central commercial square of independent shops, cafés and restaurants. They’re like being in Whistler but without the clomping of ski boots.
Across Ioco Road, Port Moody’s civic centre includes its main fire hall, city hall, the Port Moody Recreation Centre and the Port Moody Public Library. The recreation centre includes a hockey arena, fitness centre, gymnasium, yoga and indoor cycling studios, tennis courts and a soccer pitch.
Head west towards Murray Street, where Brewers Row is home to four craft breweries whose sudsy offers include everything from heavy coffee porters to light Belgian Wittes. The family-friendly breweries are all within walking distance of each other, and just across the street for Rocky Point Park, Port Moody’s showpiece playground with a boat launch, pier, hiking trails, spray park, outdoor swimming pool, skateboard bowl, as well as a stage that host theatrical and musical performances through the summer.

Barnet Highway is the closest major thoroughfare that drivers can use as a direct access route to the heart of Downtown Vancouver.
The new Evergreen extension to the SkyTrain commuter rail system that connects much of Metro Vancouver can also be accessed at Inlet Station.

A mix of townhouses and single family detached homes means there's something available in the neighbourhood for pretty much any family's budge. 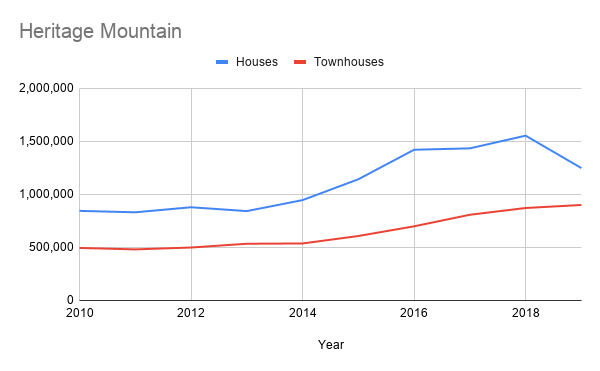