Glenayre is a small, established residential neighbourhood at the base of the eastern end Burnaby Mountain, between North Road and Clarke Road.

Glenayre’s quiet, winding streets and proximity to recreation, shopping and services make it an ideal neighbourhood for raising a family.
The western edge of Glenayre, along North Road, is the gateway to an extensive network of hiking and biking trails that lace their way around and up the Burnaby Mountain Conservation Area. The 322-acre park offers some spectacular lookouts through the trees to Golden Ears and Mount Baker to the east, and Burrard Inlet and Indian Arm to the west and north. At the summit, Burnaby Mountain Park features a beautiful rose garden that often hosts weddings, Horizons restaurant and the Playground of the Gods, a sculpture of wooden totems by renowned Japanese artist Nuburi and Shusei Toko.
Just a short distance down North Road, the Lougheed Town Centre is a bustling commercial district that is in the early stages of a massive transformation into a master-planned urban centre. When the 40-acre project is finished, it will include more than 1,500 new homes, along with 300 new shops and restaurants in a redeveloped mall.
If quaint, Main Street-style shopping is more your style, Port Moody’s historic commercial stretch along Clark Street and St. John’s offers an array of independent shops, boutiques, cafés and pubs. The city’s museum and archives are housed in an old train station and rail car near the entrance to Rocky Point Park. The park is a lively community playground with walking trails, a boat launch, spray park, swimming pool, skate park and a stage that hosts musical and theatrical performances through the summer months.
And when it’s time to relax after a day of shopping and playing, Brewery Row on Murray Street boasts no less than four craft breweries that will appeal to every sudsy desire, from a heavy coffee porter to light Belgian Wittes.

Glenayre is conveniently located to the Burquitlam and Moody Centre stations of the new Evergreen extension to SkyTrain. The 10.9 kilometre addition to Metro Vancouver's elevated commuter rail system connects to the Millennium and Expo lines at Lougheed Town Centre, or head east to Coquitlam's bustling Town Centre area.
The nearby Barnet Highway provides a direct driving route into Vancouver. 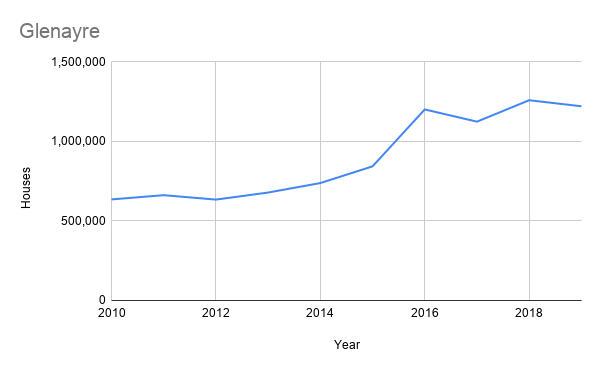