Rainscreen is a term that we often hear associated with older condos and townhouses. But what is rainscreen? First, some historical background.

The mid-late 1990s was not a good time for many owners of condos and town homes in British Columbia. Buildings that were a decade or less old were being shrouded with scaffolding and tarps. Stratas and homeowners were being hit with special assessments for costly repairs that could reach into the millions of dollars. All to fix damage from rain brought on by a deficient building code, architectural taste and shoddy workmanship. The construction boom that followed Expo ’86 meant projects had to go up fast to meet demand. Developers and buyers favoured a “California look” with flat roofs, minimal overhang of eaves, acrylic stucco or smooth exterior walls. It was an inexpensive way to build homes quickly. A lack of sufficient skilled tradesmen to fill all the construction jobs also meant workmanship was sometimes lacking. Tight timelines meant it was sometimes hasty. Add those factors to a building code that neglected the soggy reality of Vancouver weather; it was recipe for disaster. Buildings started to leak. Windows and balconies failed. Mould and rot set in. The “Leaky Condo” era began. Residential structures were most affected. But some commercial and institutional buildings like schools and even the Vancouver police headquarters near Cambie Street also needed costly repairs. A public inquiry chaired by former premier Dave Barrett examined the crisis. It made several recommendations. They resulted in more protection for homeowners as well as amendments to provincial building codes and municipal building bylaws. Rainscreen technology was developed to address the faults that created leaky condos. 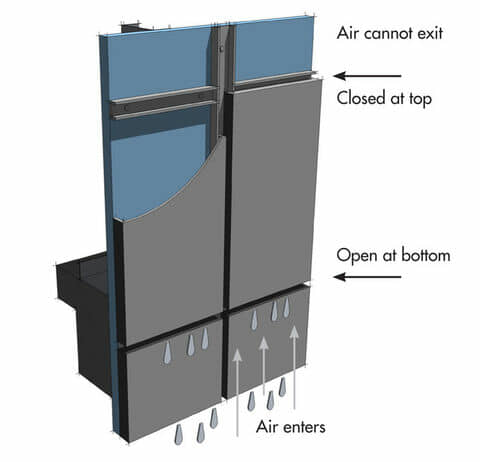 A rainscreen wall has an extra exterior cladding that is separated from the building’s wall by a cavity of pressurized air. Water that manages to penetrate the exterior surface is drained away from the wall by flashings and vents. The moisture is directed back into the ground or into storm sewers. Any water that does remain evaporates before it can penetrate the inner wall.

When purchasing a condo or town home that was built before the new regulations were enacted in 1999, it’s prudent to enquire whether it was built or retrofitted with rainscreen technology. Be sure to read the minutes from the building’s strata meetings to see if leakage has been a problem and whether it has been addressed. Have a professional  building inspector review any engineering reports that may be available. He’ll determine the quality of the building’s construction and any subsequent repairs. Also, check the quality and installation workmanship of flashings around windows, doors and the roofline. These are areas that can still be susceptible to moisture incursion if they weren’t designed, built or repaired properly. Any building that was retrofitted with rainscreen technology should have an extensive warranty. It will protect you from costly repairs for years to come.

How to recognize if a building has rainscreen technology

• Roof overhangs that extend beyond windows to protect seams from rain
• Metal flashings above windows, doors and air gaps to direct water away from walls
• Balconies and roofs that have at least a slight tilt away from the building so water can drain away
• Properly installed and connected exterior drainage pipes
• Exterior building material; brick is a natural rainscreen, but stucco can absorb water
• Look for horizontal air gaps on exterior walls and balconies
Buying a condo or townhouse that was built during the “leaky condo” era isn’t as scary as it once was. Most of them have been rainscreened in the past 17 years.

Many strata councils have also become more proactive about maintenance and repairs, especially since legislation enacted by the BC government in 2013 requires a depreciation report for every condo building. The report is prepared by a certified engineering company. It gives owners and future buyers a detailed breakdown of anticipated repairs or maintenance costs.

Condos in older buildings can provide great value. The units are generally larger, so you’ll get more living space for your money. And as long as you do your due diligence on whether the building has been rainscreened or had a history of moisture problems, you can buy with peace of mind.