Yaletown is one Vancouver’s most coveted neighbourhoods, housing many artists, young professionals and affluent Vancouverites. Yaletown was once home to the CPR railways, large warehouses and small manufacturers. The land was purchased by the government in 1987 with a commitment of redevelopment. Since then, it has been transformed into a beautiful and vibrant part of the city. Some old industrial buildings are still intact, especially along Hamilton St, where you can find many restaurants, bars and excellent shopping. Yaletown is a beautiful sub-neighbourhood that runs along on the north shore of False Creek from Burrard St to Carrall St and extends into downtown along Pacific Blvd then up Richards St to Smithe St.

There is plenty of green space to be found in Yaletown. David Lam, Coopers and George Wainburn Park are all situated along False Creek and feature a seawall that is great for walking, jogging, rollerblading or biking. During the summer months, these parks become a community hub with volleyball courts and ultimate frisbee games. In addition, Yaletown Community Centre is an arts centre and multi-purpose recreational facility featuring gymnasiums and a theatre. Here, members can take part in classes ranging from pottery and painting to music production and wood working.

BC Place and Rogers Arena are right on the footsteps of Yaletown, housing the BC Lions and Vancouver Canucks. These venues also host a variety of other events throughout the year, from large scale concerts to festivals.

Yaletown has some of the best shopping in Vancouver along Mainland St and Hamilton St including the surrounding areas. The streets boast upscale restaurants, bars, high-end clothing stores, furniture stores and hair salons.

Yaletown is one of the most walkable areas in Vancouver with essential amenities such as grocery stores and hospitals within walking distance. Car-sharing programs are readily available, or the False Creek ferries are a great option when you need to get across the water quickly.

Condos dominate the residential real estate market in Yaletown. Townhouses are available as well but with much lower supply with respect to condos. 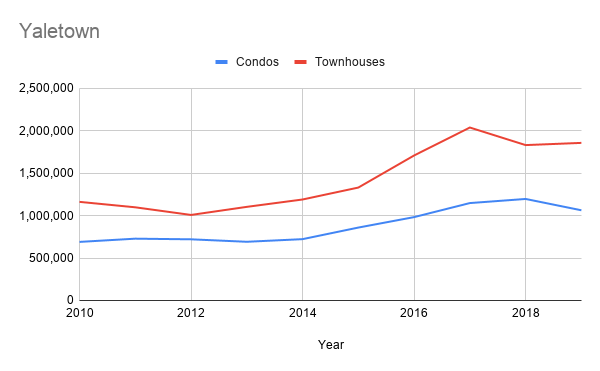 You often hear how investing in real estate is a "

The view & sunsets from this Burnaby character hom