Located in the heart of Downtown Vancouver, the West End is one of Vancouver’s hottest neighbourhoods. It runs along the northern edge of English Bay, from the Burrard Street Bridge all the way to the Stanley Park border along Park Lane and veers right onto West Georgia St, completing the West End loop. The  West End boasts great nightlife, restaurants, bars and shopping districts, and Stanley Park is just minutes away. This neighbourhood has suburban feel in the middle of a bustling city.

Stanley Park> is the West End’s most notable attraction and one of Vancouver’s best parks. In fact, Stanley Park has even been voted the best park in the world by Trip Advisor. It features a beautiful seawall that is great for biking, running or rollerblading as well as multiple beaches that are not accessible by car. Locals flock to the beaches to play volleyball or just spend the day tanning in the sun. Most of the forest in the park is second and third growth with an extensive network of trails throughout. Lagoon Lake is a great place to watch swans and different types of birds as well. In addition, Stanley Park is home to the Vancouver Aquarium and Teahouse Restaurant.

English Bay is only minutes away and is one of Vancouver’s most popular beaches for its easy access and great beach community. English Bay is home to Vancouver’s Celebration of Lights, an international fireworks competition, which draws hundreds of thousands of people every summer. In the winter, brave souls ring in the new year by plunging into the frigid water for the Polar Bear Swim, one of the oldest and largest in the world.

The West End’s main shopping and entertainment districts are located along Robson, Davie and Denman St. Robson St has become the main shopping district in Vancouver and features a plethora of retail stores. Robson St is also house to a small Koreatown which features a strong concentration of Korean restaurants within three blocks. It has become a great place for many international visitors to spend the evening eating and drinking while mingling with the locals. Davie Street is world renowned for its LGBT culture and features many great places to eat, drink and spend the evening. Davie St is one of the hottest commercial districts in all of Vancouver and attracts people from all walks of life.

Everywhere in West End is walkable and all essential amenities are in walking or biking distance. Transit is easily available as well to transfer users to various places downtown.

Since 2010, detached home sales in the West End have been extremely limited. Condos comprise the majority of residential real estate available. 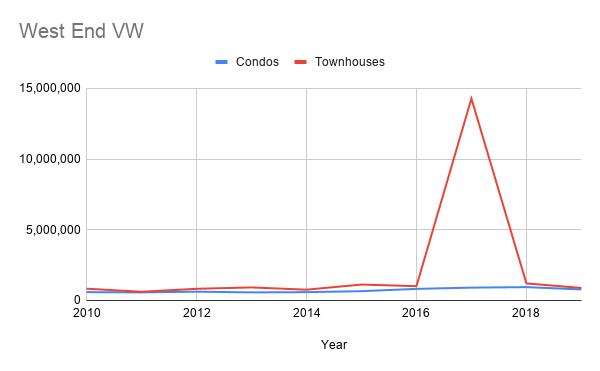