Downtown West is the heart of Downtown Vancouver and is home to the financial district, the entertainment district, Historic Gastown, Chinatown and the shopping district. It is a distinct neighbourhood that attracts international and local residents alike creating a vibrant and exciting culture.

Granville St is known as the entertainment district and is where you can expect to find numerous night clubs, bars, restaurants and live-music venues. Granville St is home to the legendary Commodore Ballroom, a renowned music venue that hosted the likes of Dr. Dre, Red Hot Chili Peppers and Coldplay. Granville St is home to Canada’s largest Nordstrom store and Pacific Centre Mall where shoppers can find high-end clothing stores and great everyday clothes such as H&M clothing and Aritzia.
Gastown and Chinatown can be found on the eastern border of Downtown West and are home to some of the best restaurants and bars in the city. Gastown was once an industrial district, growing from a single tavern founded by Gassy Jack, and its revitalization has more recently made it a tourist destination. Along Water St, you can find a large selection of great restaurants including The Flying Pig, L’Abbatoir, The Old Spaghetti Factory and Tuc Craft Kitchen. Gastown has attracted many business owners to open trendy stores and independent clothing companies that cannot be found in the main areas of Downtown.
One of the oldest neighbourhoods in Vancouver, Chinatown is also going through a revitalization, but still keeps its authentic feel and reverence for history. The streets are lined with markets, butcher shops, seafood stores and Chinese herbal shops. However, trendy restaurants and niche shops are also found here, adding a sense of modernity.
The Stadium District is a sub-neighbourhood within Downtown West developed around Rogers Arena and BC Place, the home of the Vancouver Canucks and BC Lions respectively.

Located in the heart of Downtown Vancouver, residents here have everything they need within walking or cycling distance. Car-sharing programs are also widely available.

Condos and townhomes dominate the market. 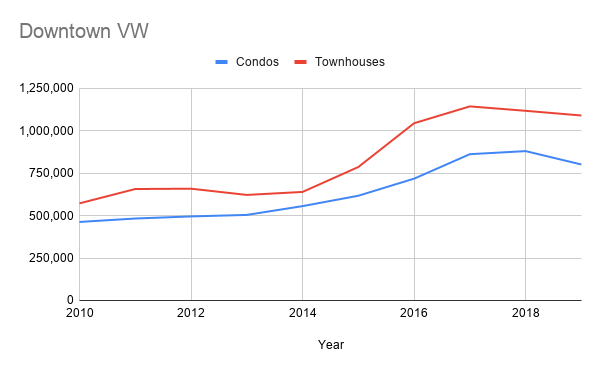