Coal Harbour is nestled in Burrard Inlet and runs along between Hornby and Denman St and extends all the way to W Georgia. The neighbourhood also encompasses the areas along Waterfront Rd W all the way until Carrall. Coal Harbour is home to spectacular views of the ocean and North Shore mountains, the Olympic Torch, Canada Place, Five Sails and a scenic seawall. It is a dynamic neighbourhood situated in one of the most beautiful geographical locations in all of Vancouver and offers spectacular living standards. It is regarded as one of Vancouver’s most prestigious neighbourhoods.

Stanley Park and the Seawall are just steps away. It is a joggers/runners, outdoor enthusiasts and nature lovers paradise. Imagine waking up in the morning, stepping right outside your building onto the seawall, enjoying the crisp morning air as you run along the ocean and into one of the biggest urban parks in North America with beautiful large old-growth trees. Coal Harbour offers its residents urban living at its finest as it encompasses nature and city in a balance that can only be found in Vancouver.
Residents of Coal Harbour have quick and easy access to drinking establishments, fine-dining and great shopping scattered throughout the neighbourhood. Urbanfare has two stores services both the northern and southern side of Coal Harbour. The neighbourhood has been designed for residents of the area to live the ultimate urban life.
Coal Harbour is one of the most visited places by tourists because of the cruise port located at Canada Place. In addition, the Vancouver Convention Centre hosts many international conferences that attract people from all around the world. Coal Harbour has become a hub for various activities, events and festivities as a result.

Coal Harbour is situated in the heart of Downtown Vancouver and all amenities, including the Skytrain, are within walking distances. Owning a car is not essential, however, there are great car-sharing programs for when one is needed.

The Coal Harbour market mostly consists of high-end condos. However, townhomes are available throughout the area. 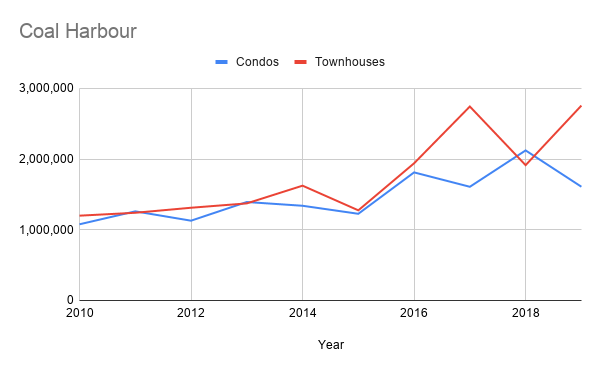