Downtown Vancouver East encompasses the western half of Chinatown and is bordered by Main St and Carrall St on the east and west respectively while Portside Park marks the northern border and the Georgia Viaduct marks its southern border. This neighbourhood is home to Railtown, an up and coming area located in a grittier, industrial area of the downtown east-side. Similarly to Gastown, Railtown is experiencing gentrification and is attracting business owners to open high-end, trendy shops. Just further south, residents can find Chinatown and all it has to offer with its food, markets and Chinese herbal stores. This neighbourhood is perfect for those looking to find a place with attitude, history and character that is in walking distance to Downtown, restaurants, shopping and, entertainment.

This neighbourhood is in walking distance to some of the best restaurants Vancouver has to offer, such as L’Abbatoir, Ask for Luigi, Notturno and Tuc Craft. Gastown is one of Vancouver’s hottest neighbourhoods with tons of history, cobble stone streets and beautiful lamp posts that make walking at night along Water Street a beautiful and romantic event. Chinatown is located just south of Hastings Street and is home to one of the largest and historic Chinatowns in North America. Since developing a revitalization plan in 2011, Chinatown has been trending upwards and is experiencing an influx of hip new restaurants, antique stores and shopping along its main streets. Chinatown still holds on to its authentic feel with outdoor markets, butcher shops, Chinese bbq stores, and herbal shops lining the streets. Downtown Vancouver East has a lot to offer and everything can be found within minutes including grocery stores, cafes, bars, nightclubs, and entertainment.

There have been no detached homes for sale in Downtown Vancouver East since 2010, with townhomes also in limited supply. The recent revitalization of the area has brought an increase in higher-end units to market. 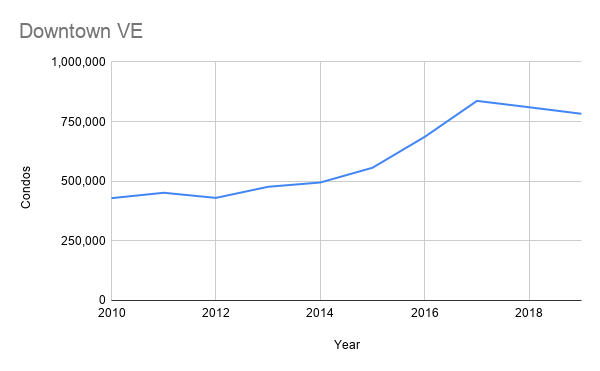