Vancouver, BC is one of the most beautiful places to live in Canada, but it comes at a high price. The average price for Vancouver Real Estate in 2019 is $1,019,600, which is 4.5% lower compared to 2018.
It is expensive to own a home in Vancouver, but it is also expensive to rent. The average 1 bedroom apartment price increased by 6.5% from 2018, which is the second highest rental price in Canada, right below Toronto.  Burnaby ‘s 1 bedroom rentals increased by 9.8%, which is the third highest in Canada.
Below is some more Vancouver real estate stats: 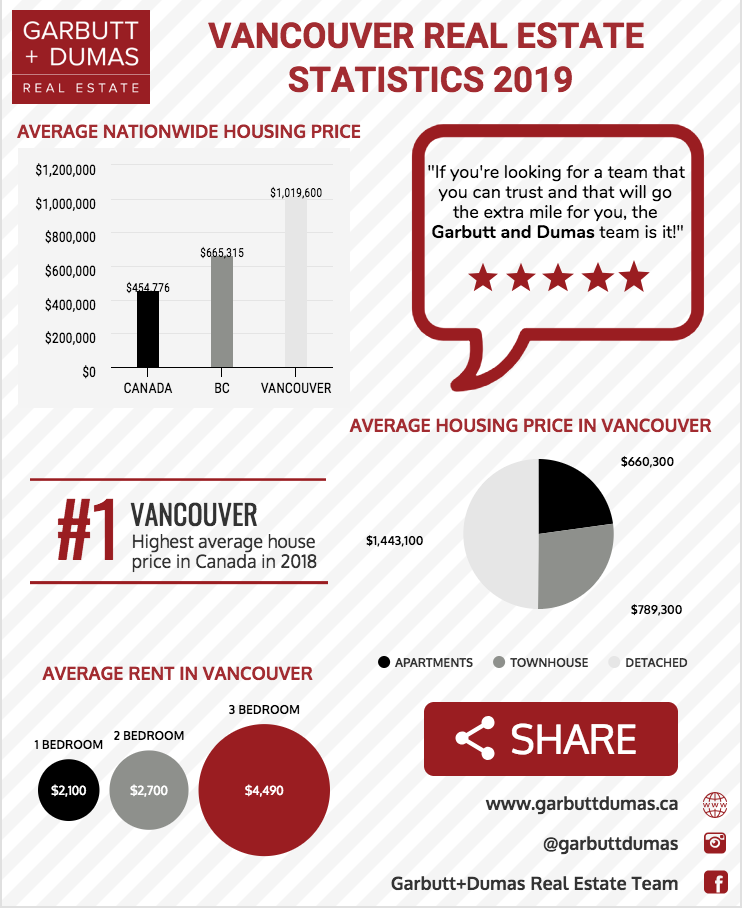 VANCOUVER, B.C. – February 2, 2011 – The Greater Vancouver housing market remained in balanced market conditions in January, although higher levels of buyer demand were seen in some of the region’s largest communities.
The number of properties listed for sale and those sold on the Multiple Listing Service® (MLS®) last month outpaced the 10-year average in both categories for January.
“There was a healthy balance between the number of home buyers and sellers in our market in January, but there’s always variation in activity from region to region,” said Jake Moldowan, president of the Real Estate Board of Greater Vancouver (REBGV). “We’re seeing strong sellers’ market conditions in areas like Richmond and the west side of Vancouver.”
Over the last 12 months, the MLSLink® Housing Price Index (HPI) benchmark price of detached homes increased 22.6 per cent in Richmond and 12.2 per cent in Vancouver West. In comparison, detached home prices across the region increased 2.7 per cent over the same period.
“When you’re looking to buy or sell a home, it’s important to familiarize yourself with the wider trends in the market. It’s equally important to seek out knowledge of your local area so you understand current market conditions in your neighbourhood,”
Moldowan said Looking across the region, the REBGV reports that residential property sales in Greater Vancouver reached 1,819 on the MLS® in January 2011. This represents a 4.2 per cent decline compared to the 1,899 sales recorded in December 2010, a decrease of 5.4 per cent compared to the 1,923 sales in January 2010 and a 138.7 per cent increase from the 762 home sales in January 2009.
Click on the link below for full Stats Package:
rebgv-stats-package-january-2011