Knight is a residential neighbourhood that runs along Knight St border by East 16th to the North and East 49th and East 54th to the South. Its western and eastern borders are marked by Argyle and Elgin St, respectively. It is a multicultural community central to many schools, parks and shopping. Knight is a perfect reflection of the ethnic diversity that many neighbourhoods in Vancouver East display.

Kensington Park, not to be confused Kensington Park in Burnaby, is a beautiful recreational area located on the corner of Knight St and East 33rd Ave. This park is situated on the north slope of the Vancouver East Hill and has scenic views of the North Shore Mountain and Burrard Inlet. Kensington park is home to a skate park, sports fields, open green spaces and baseball diamonds. Kensington Community Centre can also be found in the park. The community centre offers a swimming pool, fitness centre, a pottery studio, a dance studio, and a preschool. Memorial South Park is a beautiful multi-recreational park with a brand new running track located just on the western border of Knight.

Knight and 41st is home to Duffin’s Donuts, a neighbourhood staple with everything from donuts, Mexican food, Chinese food, bubble tea, and breakfast. The late night favourite is open 24/7 and is popular hangout place for many residents as well as a bit of a guilty pleasure. A one of a kind establishment, it perfectly reflects the cultural diversity reflective of Knight and many of its surrounding neighbourhoods.

Knight St is a major corridor that leads into and out of Richmond. East 41st Ave, East 49th Ave and Kingsway are thoroughfares that drivers can take in and out of Vancouver, New Westminster and Burnaby. Public transit users can find frequent bus services along these major routes that provide transportation to Skytrain stations or Downtown Vancouver.

Historically, detached homes have dominated the market, but that is starting to change, with condo and townhome developments. 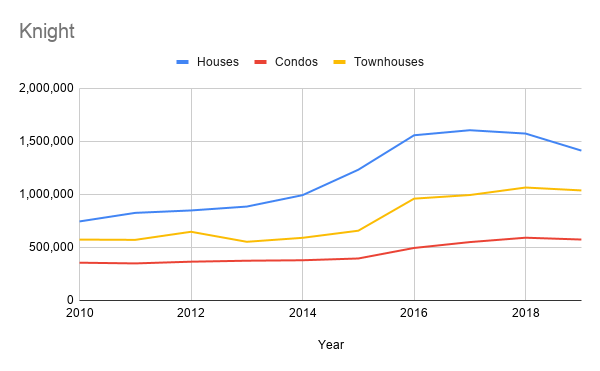