Central Lonsdale’s commercial district runs from Highway 1 all the way down south to E 11th St along Lonsdale Ave. Residents who live in this neighbourhood are in close proximity to some of the best shopping you can find in North Vancouver. This district feature many great restaurants, coffee shops, retail stores and other great lifestyle amenities.
Near the northern side of Central Lonsdale is the Centennial Theatre which is the heart of the arts and culture community in North Vancouver, hosting many plays, events and film festivals.
One of the largest hospitals in Vancouver, Lions Gate Hospital is located in the bottom right corner of the neighbourhood, servicing all of North Vancouver.

Lonsdale Ave is a major thoroughfare used to connect drivers to Highway 1. Lonsdale Ave also runs south with many major streets intersecting such as Keith Rd. Living in Central Lonsdale provides drivers and commuters with quick and easy access to major roads. There are many public transportation routes that run throughout the entire neighbourhood, mainly connecting to Lonsdale Quay and the Seabus. 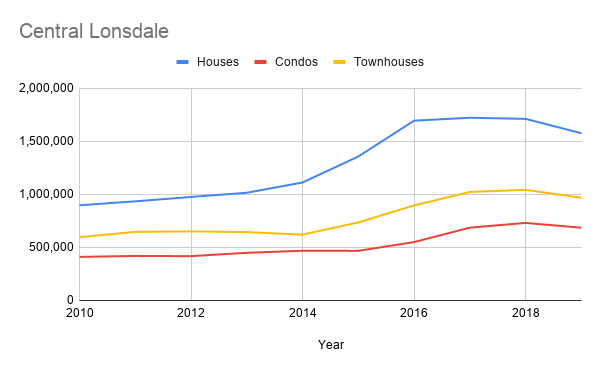