Edgemont is one of North Vancouver’s most sought after neighbourhoods. This area features large and beautiful homes with the peace and quiet of the suburbs, but is just minutes away from the busy streets of Edgemont Village. This neighbourhood was formerly known as Capilano Heights and is an area surrounded by forested parks, sitting near the base of Grouse Mountain.

The most notable attraction to Edgemont would be Edgemont Village, which boasts over 75 stores; it is home to local businesses, restaurants, cafes, bakeries, professional services, and more. Located on the corner of Highland Blvd and Edgemont Blvd, Edgemont Village is a great place to spend the day.
Edgemont is in close proximity to Mount Seymour and Grouse Mountain as well as Upper Mackay Creek Park, Mosquito Creek Park and the Capilano Suspension Bridge. Residents have a plethora of access to outdoor space and activities. Mosquito Creek Park is great place for dogs as it is an off-leash dog park that offers tons of space for your pet to run around; and Capilano Suspension Bridge is a favourite among locals and visitors.

Edgemont is located near many major thoroughfares including Capilano Road, Edgemont Boulevard and Highlands Boulevard, all of which connect to Highway 1. There are also public transportation routes that run throughout the neighbourhood. 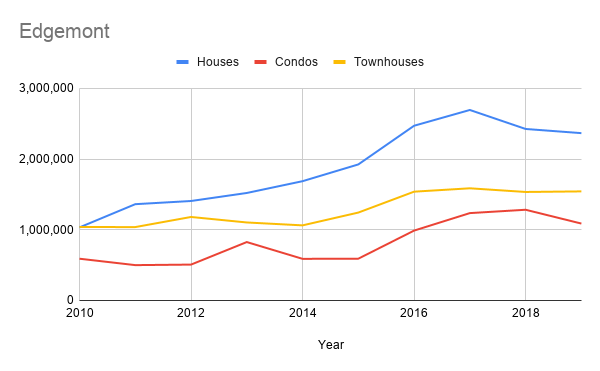