Garbutt + Dumas specializes in New Westminster. Our office is in Glenbrooke North, and we have been selling detached homes, townhouses and condos in this city since 2008. We know every nook of the city, the best streets, the best parks, the best schools and daycare, the best place to get Thai food, and the best local craft beer. Real estate is our business, New Westminster is our home, and helping people in this community is our passion.

James Garbutt, New Westminster Realtor, lives in the Queens Park neighbourhood, and has been ranked in the Top 1% of Realtors since 2011. James started his real estate career specializing in New Westminster condos, particularly in the Downtown and Quay neighbourhoods of New West. Now in partnership with Denny Dumas, who began his career living and selling real estate in Victoria Hill, we sell all property types and prices ranges throughout this city.

We are grateful to have sold some of New Westminster’s finest homes; from gorgeous Queens Park heritage houses, to stunning penthouses with rooftop patios in Victoria Hill, and even luxury waterfront townhouses in Queensborough. We also help many first-time buyers and young families buy and sell entry level houses, townhouses and condos in New Westminster as well. Being a more affordable option than Burnaby and Vancouver, yet still well connected with 5 SkyTrain stations, New Westminster is a great option for first-time buyers and young professionals, and with a small town feel, it is a great city to raise a family. If you’re considering New Westminster as a future home, we would love to help!

New Westminster is British Columbia’s oldest city, and its original capital. The city’s heritage character, central location, excellent transit service and distinct, walkable neighbourhoods are making it a popular destination for young families, urban professionals and empty-nesters. New Westminster was founded by Major-General Richard Moody in 1858 as the capital for the new Colony of British Columbia. The city’s location on the western bank of the Fraser River made it an ideal launch point for settlers and gold miners heading further into the still-wild province. New Westminster was the British Columbia’s largest city until it was surpassed by Vancouver early in the 20th century.

New Westminster feels like a small town in a big city feel.  It has one main public high school, New Westminster Secondary School, and it’s place where you’re likely to run into your neighbour at the grocery store, River Market or community event.  It has a sense of local pride of being from, or living in, New West.  Local sports, such as the Salmonbellies Lacrosse Association, create a sense of camaraderie within the city, and community events, like the Hyack Parade and Canada Day fireworks, bring locals together.

Geographically located in the centre of Greater Vancouver, and well connected with 5 SkyTrain stations, New Westminster is a convenient place to live that offers a wide range of property types and price points.  It lures in outside buyers with it’s affordability compared to its neighbouring cities to the West. However, once living in New Westminster, many often fall in love with the city and decide to stay and raise a family here.

New Westminster is a small suburb city east of Vancouver, sandwiched between Burnaby, Coquitlam on the north, and Surrey and the Fraser River on the south.  It has a population just shy of 80,000 (2020), and in geographic size it is slightly smaller than Vancouver International Airport. The Downtown core has a charming mixed of old and new buildings, which is the theme throughout city. Neighborhoods, such as historic Queens Park, are lined with charming early 1900s and pre-1900s built heritage houses.

New Westminster offers a wide range of house styles, ages and price points; from pre-1900s heritage houses in Queens Park, to mid-century bungalows Sapperton, to new modern designs in The Heights, and a mix of all the above in the West End. For detached houses, entry level price points typically come with old fixer uppers. Look for drainage issues and knob and tube electrical wiring. Neighbourhoods such as Uptown and Sapperton offer smaller homes on smaller lots, at price points that are typically much lower than detached housing options in neighbouring cities, such as Burnaby, Vancouver, Port Moody and Coquitlam. In the upper price ranges, Queens Park is considered the most highly sought after neighbourhoods, and is therefore the most expensive. Neighbouring Glenbrooke North, an extension of Queens Park to the north, and Massey Heights, with large lot sizes and views, are considered to be a close second to Queens Park in terms of appeal and price points.

In the ‘North of the Fraser River’ side of New Westminster (non-Queensborough), you’ll find townhouses sporadically throughout the city.  In newer developments, they are often situated at the base of a tower, however there are some townhouse specific developments in Glenbrooke North, Fraserview and Uptown.  Townhouses are in short supply in most of New Westminster, with the exception of Queensborough, which has an abundance of them. Young families get teased by the spacious older townhouses that are offered in the Fraserview area, but most are age restricted, and not an option for families with kids. With increased density in the Official Community Plan, we expect more townhouses to be developed in the Sapperton and Uptown neighbourhoods in the future. The city needs more townhouse developments to provide better housing options for young families because 3 bedroom housing options are currently in short supply.

Condos are the prominent property type in New Westminster, and there is a great selection of them for first-time buyers and empty nesters. New Westminster is more affordable than neighbouring Burnaby, and from a public transit perspective it is well connected with just a 30minute ride to Downtown Vancouver. Down-sizers are often drawn to larger condos along the New Westminster Quay with south facing views of the Fraser River, and boardwalk stroll to the River Market.  For elderly, the Uptown area has good condo options, new and old, with excellent walkability.  For all ages, Victoria Hill is a great community to consider, located NorthEast of Downtown, and surrounded by parks and greenery, it offers some of the best values on a price per square foot basis, for newer condos and townhouses, compared to neighbouring suburb cities.

LOOKING FOR A NEW WESTMINSTER REALTOR? WE CAN HELP! 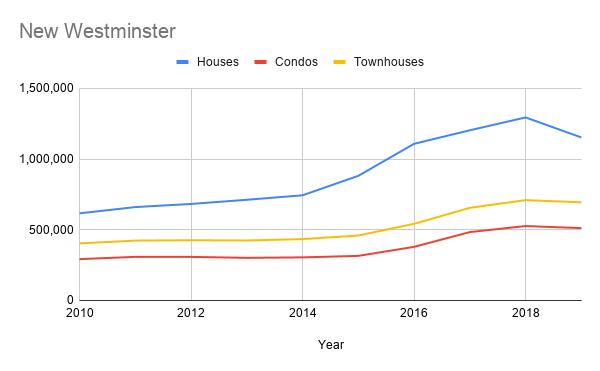